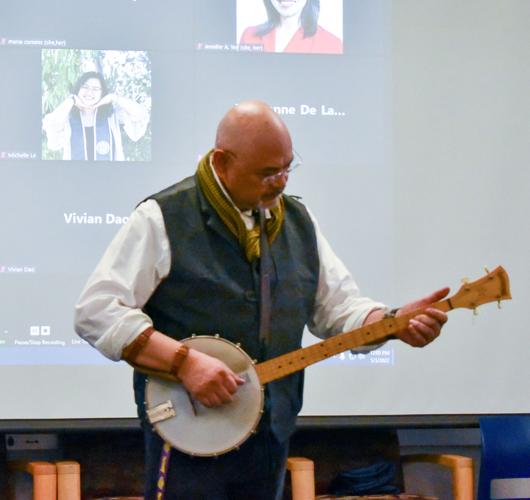 Magwili revealed that he has been writing "The Infernal Promise" since 2003. (Nollyanne Delacruz / Daily Titan) 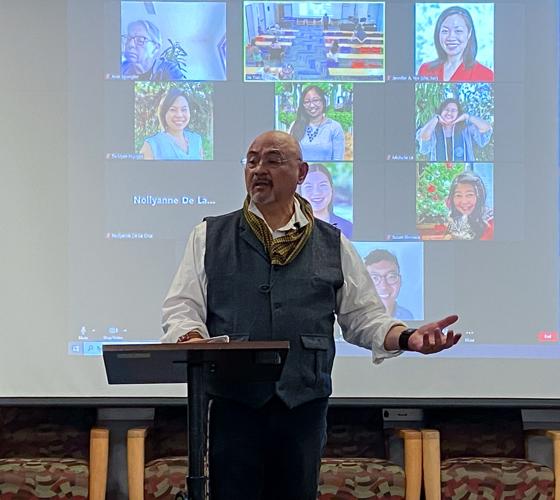 Magwili held a Q&A after his book reveal which covered topics such as Asian American representation, racial stereotypes and his writing. (Nollyanne Delacruz / Daily Titan)

Domingo Albert Magwili, an actor, author and retired Cal State Fullerton Asian American studies professor, returned to CSUF for the first launch of his new book, “The Infernal Promise,” in person and on Zoom on Tuesday. He also discussed Asian American representation in the past and present.

It’s hard to believe that Magwili retired two years ago as he joked with CSUF faculty and played songs on his banjo for them, which he came up with at the drop of his cowboy hat.

Magwili said that he reached out to CSUF to hold his book launch here, because he had already established connections with the university and valued their support.

The author said that he first started writing this book in 2003.

His book follows a wagon train populated by European and Asian immigrants in 1864. While hiding from a dust storm and bandits, a group of Asian immigrants enter a new, medieval world where animals talk like humans.

Creating space is a major theme in the book. “If it’s not there, then you’re going to have to make it yourself,” Magwili said during his presentation.

Magwili also performed several songs on his banjo. The first was “Northwestern Chorus,” a pan-Asian immigration song from the 1980s, which he dedicated to his parents, who immigrated to the U.S. from the Philippines. Another was a drinking song that he composed for the book to the 3/4 beat of tinikling, a traditional Filipino dance.

Magwili described the paradox in Asian American representation. He described that, on one hand, Asian American representation in the media is growing rapidly. He cited films like “Shang-Chi and The Legend of the Ten Rings,” “Turning Red,” and “Everything Everywhere All At Once.” He also listed actors and actresses like Michelle Yeoh and Awkwafina.

However, he said that media representation cannot fix racism. Magwili said that anti-Asian sentiment and microaggressions toward Asian Pacific Islander Desi American folks still continues to this day. He also noted the rising hate crimes and incidents toward people of Asian descent.

“It is horrible. It is amazing. And I have a conviction about this,” Magwili said. “And that is that creative people have to continue making creative stories.”

Magwili expanded on the topic, saying that representation can reinforce feelings of belonging and identity. He said that Asian American representation can be improved by having writers, directors and producers involved in the storytelling process.

The book launch ended after a brief Q&A session, where he answered the audience’s questions about stereotypes, the East West Players, and his writing process. Magwili’s final piece of advice was for writers to write more.

“If you have something, allow yourself to be passionate about it,” Magwili said.

Michelle Le, a second-year graduate student in the American studies master’s program, attended the event over Zoom. She said that she was interested in it because she works on projects about Asian American representation and literature.

“It was a little difficult, because it was on Zoom, so there were things that I could and could not hear, but I did very much enjoy his performance and the way he talked about the elements that he incorporated with his performance and his book,” Le said.

Although he’s retired, Magwili said that he returned to CSUF to teach Asian American Film and Video during the winter and summer sessions. His book is also available for purchase at Titan Shops.

Magwili said that Asian Pacific Islander Desi American heritage month allows us to celebrate people who may be different from us.

“It means that everyone gets a parade. Folks who, not only are they ignored, but sometimes they’re persecuted just for being different,” Magwili said. “It is a hard, formal, institutional way of shining light on communities that don’t have a light shined on them at all.”