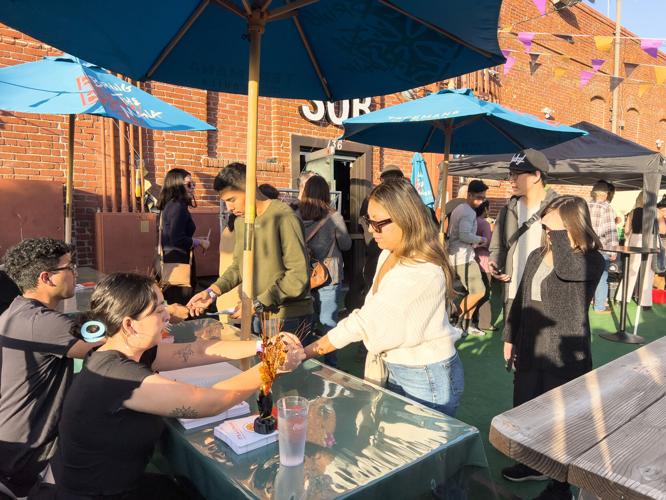 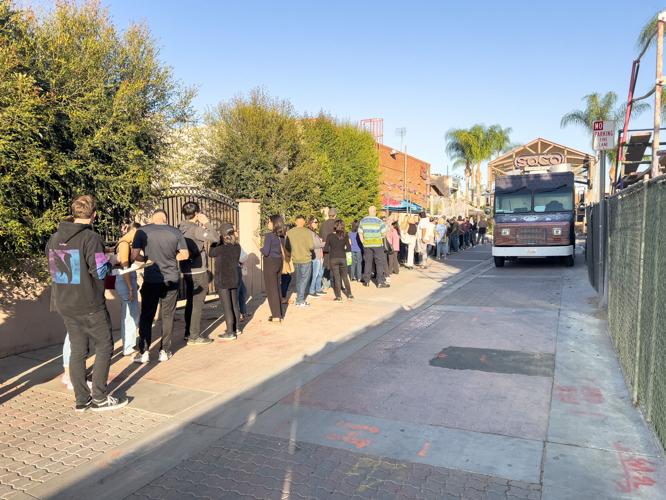 The annual food event, also known as Crave and Crawl, was hosted by and open to members of the app e-foodie, a mobile app that provides food deals for restaurants surrounding Cal State Fullerton. The event took place last Thursday with an estimated 1,100 people in attendance and  1,300 app downloads by the end of the night.

Brian Williams, the owner and creator of e-foodie, said the idea for Crave & Crawl was to introduce new restaurants or concepts to e-foodie members, .

Williams and his wife wanted to create a local deal site similar to Groupon.

“There might be a better way to do something kind of similar but make it hyperlocal, and we wanted it to have a name recognition,” Williams said.

As a CSUF alum, Williams said the university was a great target audience to provide an opportunity for students, faculty and staff to take advantage of e-foodie deals. Williams said e-foodie works with restaurants in the tri-city area: Fullerton, Brea and Placentia.

The food festival was concentrated in the southern end of downtown Fullerton near the intersection of West Commonwealth and Harbor Boulevard with about a dozen eateries included. The farthest restaurant was Angelo’s & Vinci’s, a couple of blocks north on Harbor near Chapman Avenue.

The star of this crawl was Milk & Cookies, the only place with a line at any given time during the event. As implied in its name, this aesthetically-pleasing dessert bar served the basics but with a little something extra.

Having been open for only a few weeks, Milk & Cookies appeared to find a new home in the heart of Fullerton.

“That was our first time doing one of those, and it was definitely a big hit,” said Rob Goe, owner of Milk & Cookies.

Upon stepping inside, patrons were given a choice of homemade ice creams such as cookie monster, brown butter English toffee and lavender. Milk & Cookies prepares its own homemade cookies with a range of flavors, such as lemon blueberry, s’mores or Royal Hawaiian. Once guests picked their flavors, the ice cream was piled onto the warm cookie or turned into an ice cream sandwich. The twist on this dessert bar is that it also offered flavored milk, like orange creamsicle, strawberry, banana, chocolate, root beer or plain milk to dip the cookies into.

Goe opened the first Milk & Cookies location in Newport Beach and expanded to two other locations with a fourth expected to open in Santa Ana in the coming weeks.

As people checked in for their wristbands, Garcia’s South of the Border Cantina & Grill handed out street tacos and offered a drink deal before guests grabbed their maps and headed out to explore the scene.

The Mediterranean experience D’Vine gave out samples of their menu staple: hummus and chicken shawarma with pita bread accompanied by a sweet tea.

Pour Vida Tortillas and Taps invited patrons to sit at the bar and enjoy a brussel sprout taco. One had to pace themselves for the more than dozen food plates around the next corner like Mickey’s Irish Pub, which attracted a large crowd because of the Ravens vs Buccaneers NFL game. Similarly, the High Horse Saloon had a full bar that drew in a thirsty crowd.

Williams said that what made the event such a success was that students, coworkers and friends were excited to connect with other people.

“They’re looking forward to not just visiting the restaurants but making a really social experience,” Williams said. “And that’s what’s been missing for a long time. I think we’re filling a void in downtown Fullerton.”