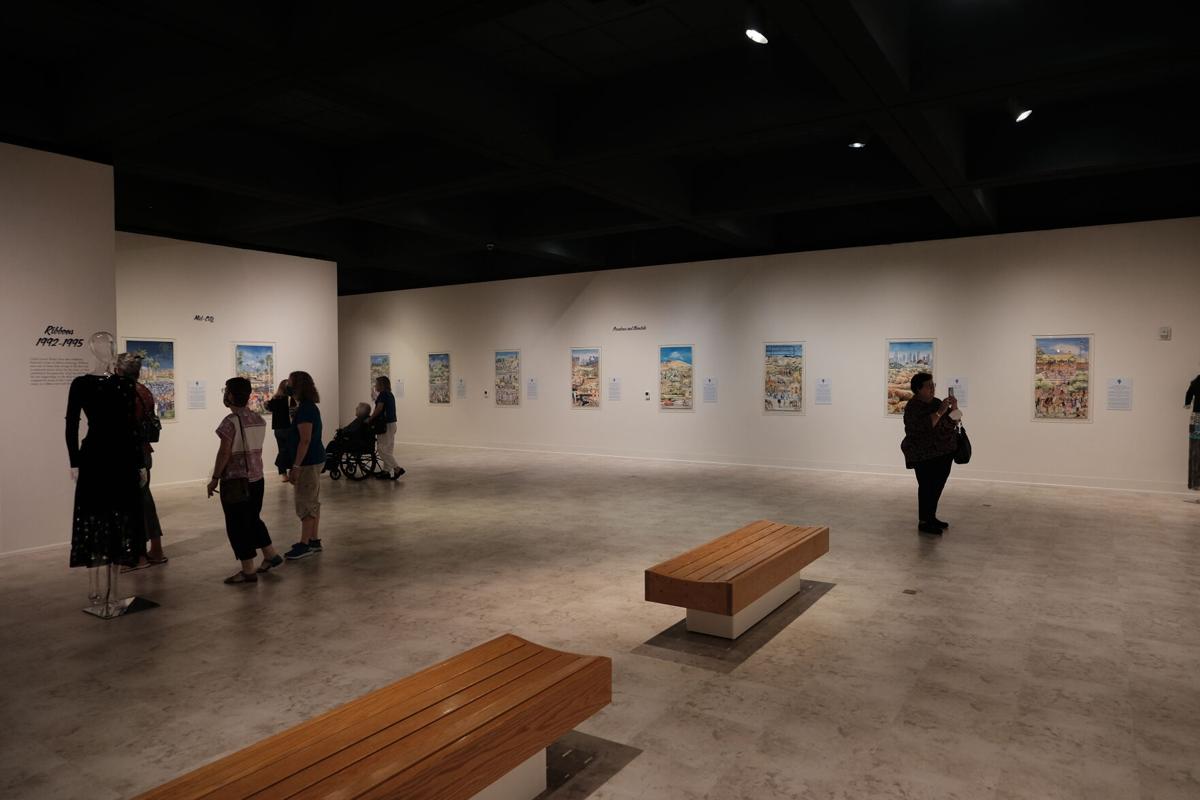 Visitors at the Bowers Museum view the “The Gift of Los Angeles: Memories in Watercolor by Gayle Garner Roski” exhibit on Sept. 25. (Spencer Otte / Daily Titan) 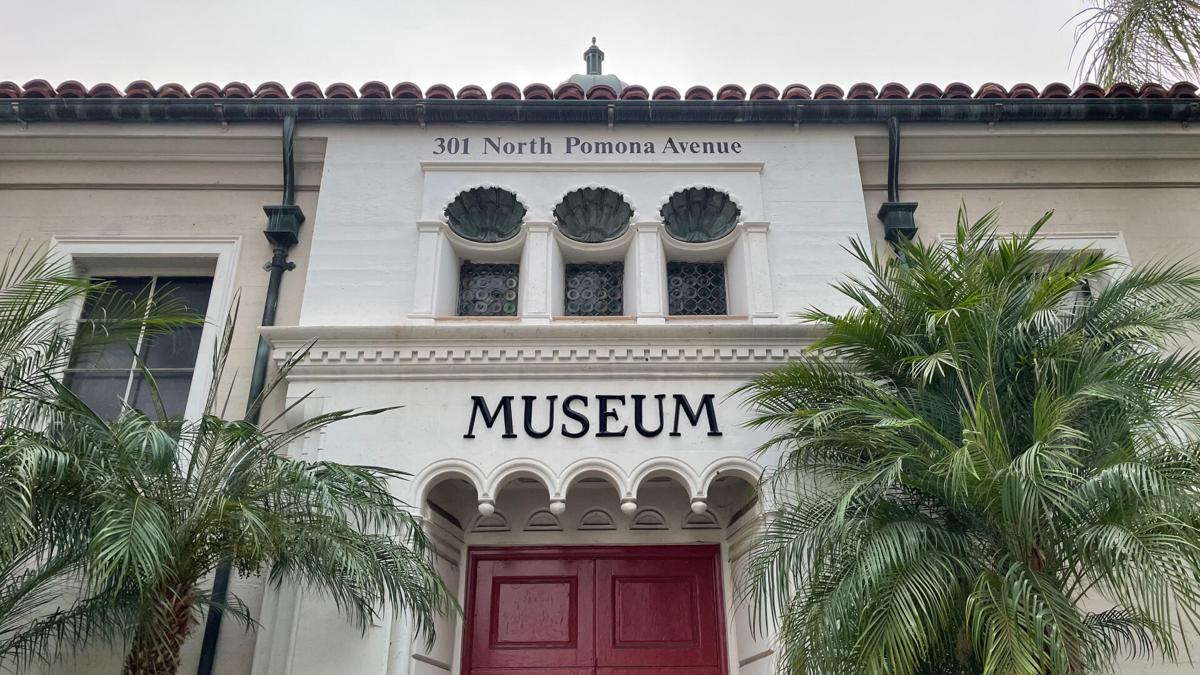 The Fullerton Museum Center was founded in 1971 and holds a permanent exhibit for Leo Fender, the creator of Fender guitars. (Bryan Corrales / Daily Titan) 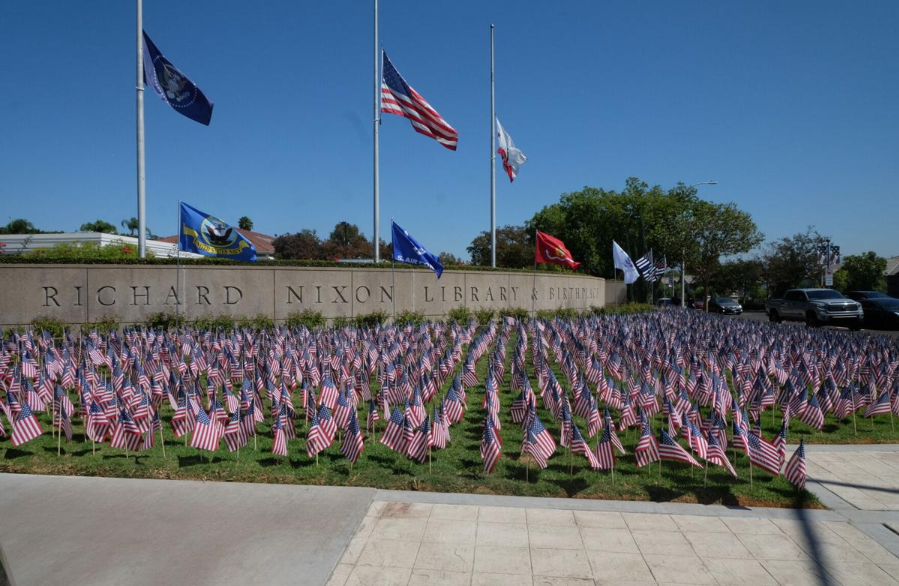 In front of the Richard Nixon Library and Museum, 2,977 American flags were on display on Sept. 11. (Spencer Otte / Daily Titan)

Looking to expand your artistic horizons? Need an intellectual pursuit to kill time during the day?

Here are three great local museums — all within a half-hour drive from campus.

The building was constructed by the Works Progress Administration during the Roosevelt administration right around the 1930s or ‘40s, said Ruth Aul, an employee for the museum.

Celebrating its 50th anniversary, the Fullerton Museum Center has become a staple for locals interested in the fine arts and music. It holds a permanent exhibit for Leo Fender, the creator of Fender guitars. Fender lived in the Fullerton, Anaheim area most of his life and had a factory for his guitars here until the company moved to their new location in Corona.

Every Thursday night, the Fullerton Museum Center hosts a Beer and Wine Garden where locals can gather to listen to live music or shop at the farmers market featuring local vendors.

“We had a late opening, but typically it's about a good third of our budget. Not a third, but close to it,” Rubalcava said.

The Fullerton Museum Center offers an annual membership program where members receive a 50% discount in exhibition openings and 10% off the gift shop. Cost of membership for students was lowered this year from $50 to $30.

The museum will open the “Land is Kin” exhibit on Oct. 7. According to the website, the exhibit is “inspired by the Southern California native people's relationship to the land” and will feature art from several indigenous artists. It is in collaboration with several other museums in the area, including the Muckenthaler, Fullerton College Art Gallery and Cal State Fullerton’s Nicholas and Lee Begovich Gallery.

Members and Children under 12 - Free

Founded in 1936, the Bowers Museum began as a museum dedicated to Orange County’s history. Since then, it has grown six times larger and features art and artifacts from around the world.

“Our mission is to enrich lives through the world's finest arts and cultures, but basically, that is really broad, so it leaves us with a platform to celebrate all of the different cultures from around the globe,” said Kelly Bishop, the Bowers Museum vice president of external affairs.

There are eight exhibits currently on display with subjects ranging from Pacific Islands art to gemstone carvings from sculptor Harold Van Pelt.

The permanent gallery, “Ancient Arts of China: A 5000 Year Legacy” is currently closed for renovations, but will reopen on Oct. 2. The museum will open a new gallery on Dec. 12, entitled “All That Glitters: The Crown Jewels of the Walt Disney Archives,” which will feature jewelry from a number of Disney and 20th Century Pictures films.  Another featured gallery holds a distinguished paintings collection which has work dedicated to California’s visual history between 1850 and 1930.

Bishop also said that the Bowers Museum offers a special student annual membership for $25, but that does not include entrance to any of their special galleries.

Built on the site of the 37th president’s birthplace in Yorba Linda, the Richard Nixon Presidential Library and Museum is well worth visiting for anyone interested in the legacy of the polarizing president and the turbulent period of American history that he oversaw.

While a number of galleries are closed due to the COVID-19 pandemic, visitors can still see “The President and the Planet: Richard Nixon and the Environment,” an outdoor exhibit that examines the environmental policy of the 37th president, who signed into law the Environmental Policy Act on Jan. 1, 1970, which established the Environmental Protection Agency.

The permanent museum includes 22 rooms that explore different aspects of Nixon’s life, like his early years in Orange County, political rise during the ‘60s and his foreign policy during the height of the Cold War and Vietnam.

Visitors can also see “The Presidents Club,” a special exhibit exploring the personal relationships between presidents, including dozens of letters exchanged between Nixon and former President Donald Trump. The gallery also features political memorabilia dating back to America’s infancy in the 18th century.

Nixon is perhaps best remembered for his involvement in the Watergate scandal which ultimately led to his resignation. The museum does not shy away from his controversial legacy and includes an entire exhibit devoted to the scandal where visitors can view a timeline of the case from the break-in to Nixon’s resignation. Visitors can read the evidence, and listen to the infamous Watergate tapes as well as hear first-hand accounts from those who were there.