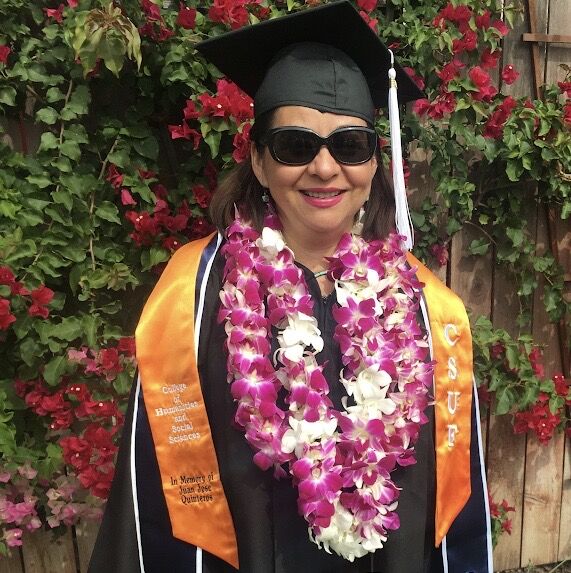 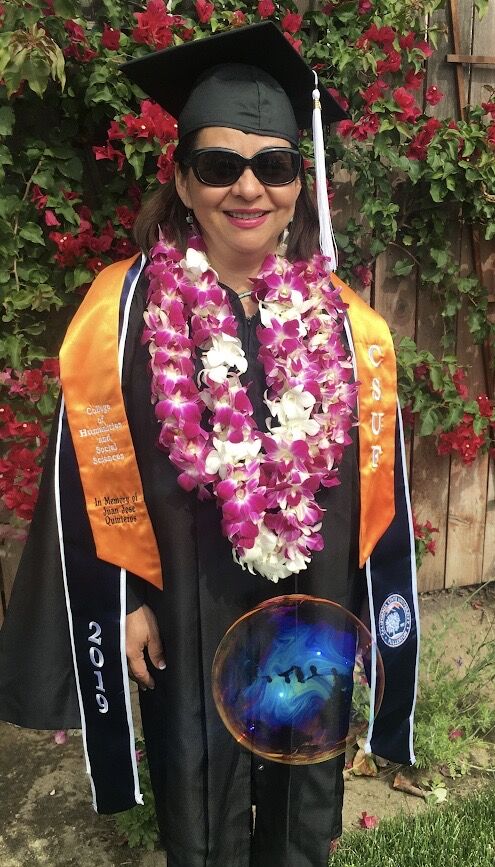 Earning a master’s degree demands years of hard work, sacrifice and tuition. Students are accepted into a graduate studies program with enough passion to tackle hours of labor for the satisfaction of walking on graduation day. For Blanca Quinteros, this is a process that she endured twice.

As strong as a student’s passion to learn is, life is stronger. Unforeseen problems occur that no longer allow education to be a priority.

Quinteros completed her master’s degree in gerontology at Cal State Fullerton in 2009, with the exception of her thesis. Before she could completely finish the program, life became cruel.

Quinteros experienced financial and personal problems that led her to believe she had no choice but to put her education on hold.

A little over five years later, Quinteros decided that she was ready to return to CSUF for the completion of her master’s thesis. When she decided to return to school, she had a new family. Having a master’s degree was not only in high demand but a necessity, she said.

“It took me a while. It was a process to find out, and eventually, I found out that after a certain time the courses expire,” Quinteros said.

CSUF graduate students have five years to complete all degree requirements and can request a two-year extension by filling out a petition. After the time limit, all outdated course work must be repeated.

After hearing about the expiration date, Quinteros’ first instinct was to give up on the idea of earning a degree. But a few years later, and after considering the ways that a master’s degree would benefit her career, she decided to start the program from the beginning.

“The sad part and the reason why this is so important for me is because tuition more than doubled in a small period of time,” Quinteros said.

In addition to being about $40,000 in debt, Quinteros had to balance her courses and job with the responsibilities of being a mother to her first child while pregnant with her second.

“When I found out that I was pregnant with my second child, I decided that I needed to go back to school and that I was going to fight back to get back into school,” she said. “I needed to show my kids that I could do it.”

As she repeated the program, Quinteros avoided telling her classmates about her situation. Quinteros said she did not want people to pity or judge her for not knowing about the time limit. She commuted from Los Angeles to Fullerton, so she tried to take her courses one day of the week, often arriving home late.

Although it was mentally draining to take retake courses she already completed, she persevered and finished the program, this time for good. Quinteros said she was flushed with feelings of pride and joy when she graduated in spring 2019.

“I cried and cried the whole day. My six-year-old says, ‘Mom, why are you crying,’ and I couldn’t explain to her that you could cry when you’re happy,” she said. “It was climbing Everest. That’s what it felt like.”

The support of her family encouraged her to continue as they believed she could do it, she said. Beyond emotional support, her husband took care of the kids on the nights that she was on campus late, Quinteros said.

She also received support from her professors and the gerontology department who made sure she was able to take the courses she needed to graduate, she said.

“My degree is more valuable to me because I feel like I did it twice and I did it right,” she said. “Nobody can tell me that it’s not possible to get a master’s degree.”

Quinteros said most students in her situation would not have returned to complete the degree, which is why she feels the university should be more transparent about the expiration of graduate credit.

Quinteros said that a disclaimer stating that courses will expire in five years should be included in the graduate study plan.

“Had I had it somewhere, you better believe I would’ve been back at school on time. Just probably right on time,” Quinteros said.

Quinteros said that people would blame her for not reading the entirety of the thick pamphlet in the school catalog where the disclaimer is written. However, she said that she finds irony in the fact that the university sends her notices to return a textbook when she already knows she’s supposed to.

“I want to be an example of a mistake that I take responsibility for. I made the mistake. I fixed it. I’m not going to blame anyone for it, but it is a mistake that not only happened to me, it has happened to other people and it will happen to more. If we can just fix it with a simple currency from the university’s part, it could make a difference because it would have made a difference for me,” Quinteros said.