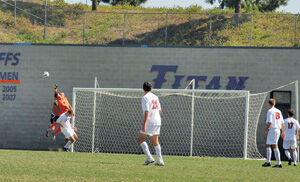 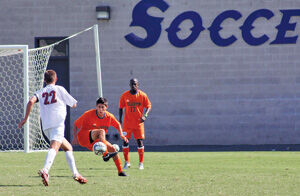 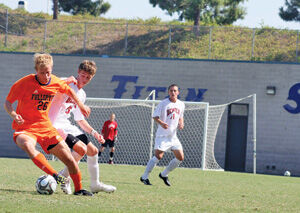 Redshirt freshman Jonathan Birt makes a play on the ball against a Denver defender. Photo by Shruti Patel. 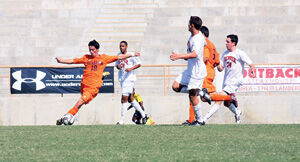 Senior Justin Burney tried to pass to a teammate. Photo by Shruti Patel

The Cal State Fullerton men’s soccer team lost in a 2-1 heart breaker to the University of Denver in overtime on Sunday at Titan Stadium.

Pioneers’ senior midfielder Collin Audley kicked the game-winning goal off a penalty kick in the 95th minute after Denver’s freshman midfielder Josh Wren was knocked down in the penalty box by a Titan defender.

â€œIn fairness, we had chances to win the game, and we shouldnâ€™t have given it to the officials to decide it,” said Titans Head Coach Bob Ammann.

The Titans were clearly upset after the game, especially losing in such a devastating way.

â€œItâ€™s always disappointing when you lose a game like that on a penalty because, in all fairness, I thought the call was a little harsh,” Ammann said.

Fresh off a 1-1 tie against Coastal Carolina in two overtimes on Friday, the Titans were looking to get into the win column during the weekend-long Big West Challenge at Titan Stadium.

“Its always frustrating when you lose; our goal was to win both,” Ammann said.

The game started off slow, but Denver was more active on shots and corner kicks.

CSUF was first to get on the scoreboard with senior midfielder Jamall Farquharson’s goal in the 30th minute. Farquharson waltzed into the front post on a rebound off of sophomore midfielder Kevin Venegas’ shot and tapped it in to make it 1-0 in favor of the Titans.

â€œI thought we were in control for the entire first half, up until their goal. They were sitting back, and we were kind of having our way with them,” Ammann said.

Before the first period was over, the Titans had a couple more chances to set up a more comfortable lead, but they could not put the ball in the goal.

â€œAt halftime, we didnâ€™t feel like we had to make any adjustments. We just had to keep doing what we were doing and move the ball around,” Ammann added.

When the two teams came out for the second half, the Pioneers were more aggressive on the ball.

â€œIn the first half, we completely dominated them, and the second half was more even,” said sophomore goalkeeper Trevor Whiddon.

In the 55th minute, redshirt junior midfielder Jesse Henderson out sprinted the Titans and launched a pass to freshman forward Alex Tarnoczi to tie the game at 1-1.

â€œThey punted well and beat us on the counter and, from that time on, it gave them new life, and we were a little bit on our heels,” Ammann said.

With less than five minutes left in regulation, the Titans had a great shot to win the game, but they could not capitalize. Their last chance at a score had the crowd buzzing as it hit the goalpost.

“It was a tough game; it was clearly not one of our best performances,” Farquharson said.

Out of the four games in the tournament, three games went into overtime, including both games for the Titans.

It was a disappointing loss, but the Titans will not dwell on the loss for too long.

“We just have to move on and get ready for Cal Poly on Wednesday,” Farquharson said.

The Titans will play in their first league game of the season against the Cal Poly San Luis Obispo Mustangs on Wednesday, Sept. 30, at Titan Stadium.