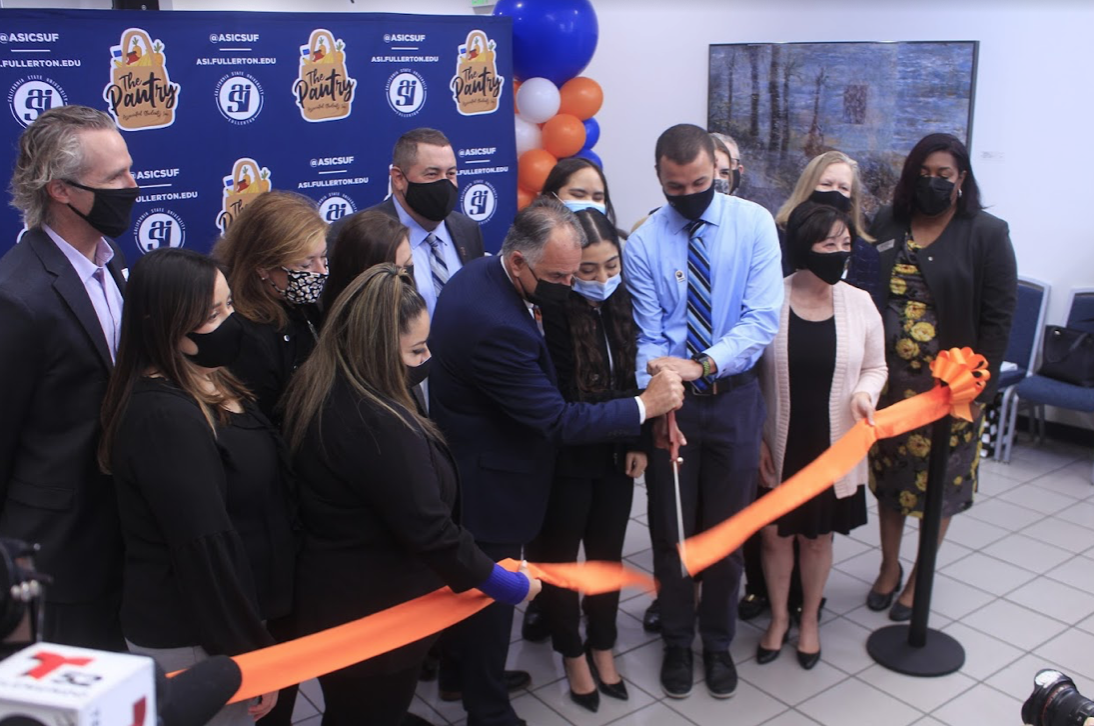 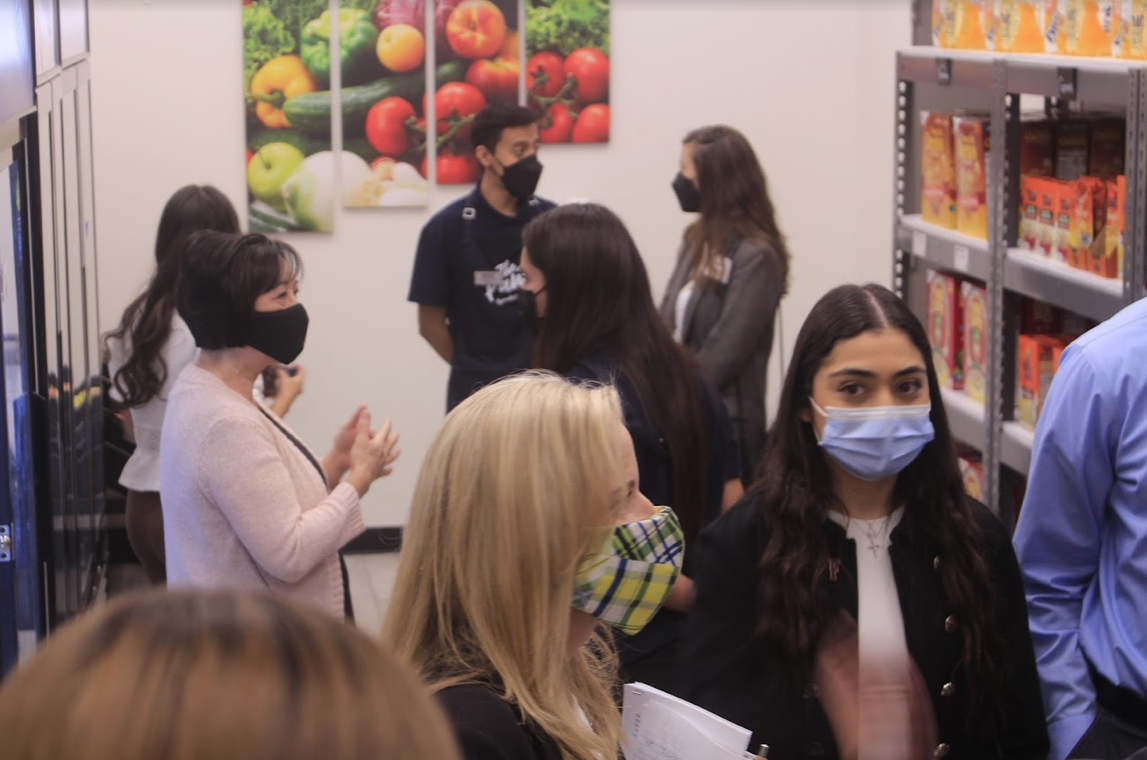 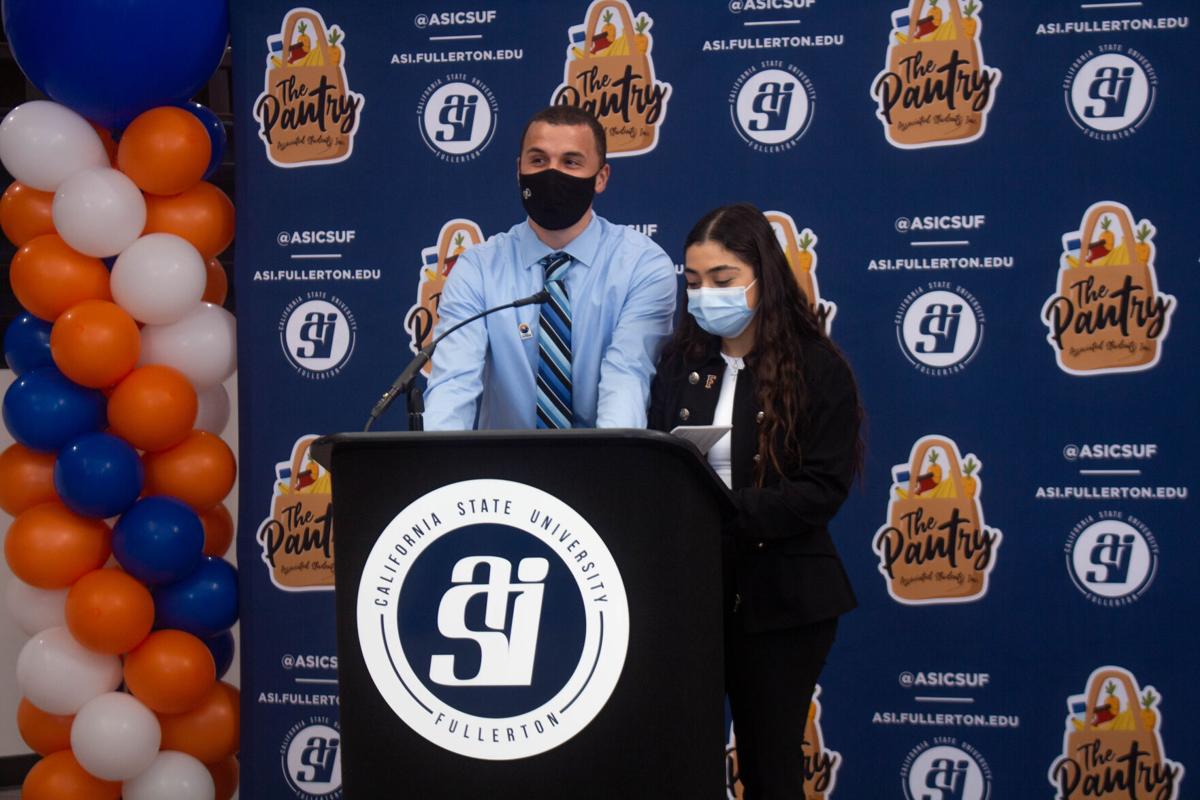 In an effort to combat food insecurity on-campus and students’ homes, the Associated Students food pantry — which took four years to bring to fruition — was celebrated with a grand opening ribbon-cutting ceremony at the Titan Student Union.

Since opening on Aug. 23, the pantry has helped over 1,200 students and their families by providing them with essential foods like milk, eggs, pasta and tuna, among others.

The pantry is currently open to all students who are in need of food. There ar no requirements or qualifications to use the resource. Students can visit once a week by appointment or as a walk-in.

“We are thrilled that the pantry will provide a positive impact for students in need by lowering barriers to food access. Most students who experience food insecurity have a strong negative impact on their GPA and diminishing academic outcomes. With the help of our food pantry, we’ll be able to provide healthy food sources for students in need, in hopes that this will impact their academic and personal wellbeing,” said Mary Chammas, the ASI board of directors chair.

Among those in attendance were fifth district supervisor Lisa Bartlett and former ASI leaders who have supported the food pantry opening.

“Food insecurity, as you know, continues to be a very serious issue among not just residents of Orange County, but in particular with students and when you think of the thought of going to class and you’re hungry and your stomach is growling, that’s just never a good thing because it’s really hard to concentrate,” Bartlett said.

While many colleges have introduced food pantries on campus, the growing number of students seeking assistance not only speaks to the effectiveness of having a pantry available, but it also shines a spotlight on a growing problem, Bartlett said. She said that students should never be forced to choose between a textbook or a healthy meal.

“We all want students to be successful and enjoy the college experience and fulfill the role of graduating with a college degree. But in order to achieve that, it’s important that they have the necessary resources to promote that academic excellence; sustain a healthy mind and body, and minimize the stress and anxiety,” Bartlett said.

Jennifer Ramirez , an assistant with the food pantry, said that she has also benefited from the pantry’s existence and that it has saved her money on groceries.

“There are eggs, there’s milk and there’s even produce. This has really helped me and my family,” Ramirez said.

As a commuter, she said sometimes the commute is an hour-long drive and that it helps to have a snack because sometimes she has headaches.

“My family is also really grateful that our university is offering assistance like this. Not only for me, but for other students who probably need more help,” Ramirez said.

Tonantzin Oseguera, the vice president for student affairs, said that this mission was personal to her as someone who faced food insecurity during her college years and as a child.

She said that roughly 73% of students are non-traditional, which means they attend college part-time while being employed full-time and are financially independent.

“Food insecurity has doubled among our Cal State Fullerton students since the pandemic began in spring of 2020. Given these challenges, these students find it difficult to support themselves while also attending college,” Oseguera said.

“I’m so excited to have the food pantry open. It’s been a long time coming. We’ve been working hard for a number of years and we had a bunch of impediments but now we’re finally here. Our students deserve this and I love that this is a student-led initiative,” Virjee said.

Virjee spoke about visiting Cal State Fresno during his time as General Counsel for the CSU system almost 10 years ago and meeting ASI students who first introduced him to the topic of food insecurity. At the time, he didn’t know what they were referring to, he said.

“Then they started telling me what they really meant, which was, students were hungry. Not only were students hungry, but their families were hungry too. I had not focused on that; that we had students and families in the CSU who were hungry. And I was shocked,” Virjee said.

He said the plan is to expand in a way that allows the pantry to serve way more students in the future.